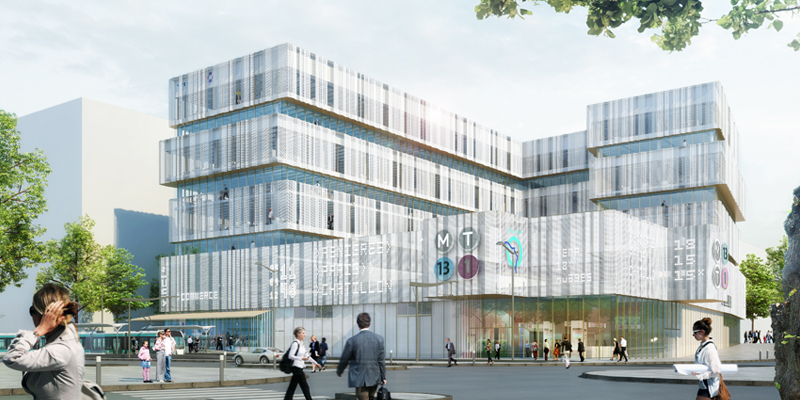 The project is first and foremost an architectural proposal in order to best respond to the urban issues that are developing in the changing Coubertin district. The challenges of the competition are above all the structuring of a crossroads, a singular nodal point that concentrates numerous public transport networks. This quality in terms of facilities must now be relayed by ambitious architectural programmes that affirm the identity of a new district that conveys the values of our time.
Breaking with modern urbanism, the aim now is to affirm a composite architecture housing multiple programs and an urban form where density allows the structuring of the island, where architecture comes to confront public space. This situation, at the crossroads of two major axes linking the city to the metropolitan road network, gives the façades of the office building a predominant role in reading the building as a marker of the entrance to the city.
The other major challenge of the project lies in the management of the different flows that will be generated by the hybridisation of the tram and metro station, the commercial zone of the pedestrian mall on the avenue nouvelle and the entrance hall of the office building.

The project must therefore generate a unity of place while itself generating visual continuity and articulate situations by proposing a strong identity. As an answer to these issues, we wanted to work on a volumetrics around the superposition of strata. High” strata housing the premises of the office building and “low” strata encompassing and unifying the metro station in the operation. A play of offset and alternation between the fully glazed levels and the levels clad with metal cladding enlivens the general volume of the building and gives a strong and dynamic identity to the entrance to the city.

Our project is characterized by the definition of a common denominator, a major architectural feature able to give a strong coherence to the structuring of the island and the crossroads. In order to best hybridise the metro station within the office operation, we are extending the stratification logic of the first two levels of the office building in front of the station. This collective “stratum” is composed of two entities: one of glass at the ground level and the other of a mesh at the first level, which defines a relationship to the ground, a relationship between public and private space, in a modulated linearity. More than an architectural vocabulary, it is a system that can change state, evolve, adapt in relation to the programs that these straps come to dress.

The project is a strong signal of dynamism in the new district of Coubertin. At once dense and hybrid with the imbrication of the metro station in the architectural writing of the volume, the project also wants to be subtle by dressing certain “strata” with a metallic mesh. Just like micro-perforated blinds, the mesh allows the eye to pass through to guarantee visual comfort for office users from the inside, while it presents an evanescent curtain-like appearance from the outside via a set of folds.

The transport stratum that we are putting in place via the strip that surrounds the station and the building on the first two levels will allow for active interaction in the mobility of the site. Depending on the type and speed of travel, different types of information will be displayed on this banner, from advertising signs to daily travel information. Our intervention is an alternative to simple façadism. Reasonably integrated into the project’s volumetry and architectural language, this common base must take advantage of its strategic position at the corner of two major transport routes (pedestrian, car, tram, bus and metro) to give intelligent added value to the project.