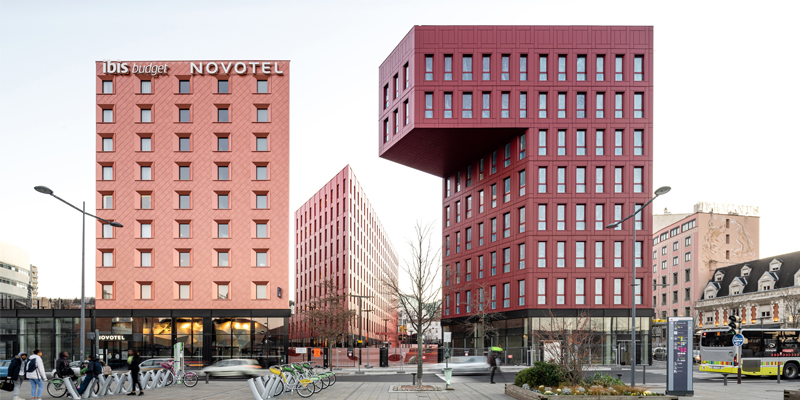 Contribute to a new polarity in the landscape

Located across from the St. Etienne station on the Esplanade de France, the influence of the intervention at the heart of the BIA Châteaucreux is a link between neighborhoods and horizon lines, a low point in the topography of St. Etienne in front of a preferred route to the city center. Combined with the scale of the project and the symbolic value of the program, This unique location gives the project a special status in the construction of the city. The project subscribes to the contemporary idea of the construction of the city that leads to the creation of rhythms, of multipurpose spaces contributing to the realization of a less linear environment, able to evolve and mutate. The goal is to embed the large commercial component of the neighbourhood in a more complex urban dynamic, made of interlocking assemblies essential to any large and vibrant city. Thus, the project offers an open floor plan, initiating continuity and affiliations, creating links between polarity and panoramas, hills and plains, lower and upper town.

In a preliminary study of the uses of land in St Etienne, we began to articulate a sculpted volume, defined by it’s relationship to a city structured by the frames and cut outs on the horizon. The initial volume deformes, breaks into three compact masses, a multiplicity of plans and volumes and two mineral axes. The volume deteriorates in a specific manner leading to the establishment of a new topography. It is therefore a very open plan, traversable and animated, a space organized by the characteristics of the multi-purpose program, able to create discourse with the city to better develop and animate it. Considerations of density, mass, voids and solids were central in the development of the project. The project is first extruded to form an exact podium to ensure alignment and management of tight limits in order to densify and animate public spaces without residual anecdote. The heart of the block forms a fifth unifying and transversable facade, which is fully engaged in the work of modeling the volume, creates an open promenade and provides a view of the surrounding landscape.

The links the project forms with the public space and the ground are merged in a landscaping proposition in which areas of commercial interface, restaurants and services are placed around the periphery, creating direct links with the public space. At the edge of the parcel, these pleats become a large stair that transforms the esplanade into an open agora. The length of the Avenue Denfert-Rocherau, the podium lifts up to reveal a line of shops and services. The hotel sits at the end of this line. The angle is created by the rigorous massing of the project, the hall clearly articulates two facades with the same voice and links them to the ground floor shops by placing a brasserie on the south façade.