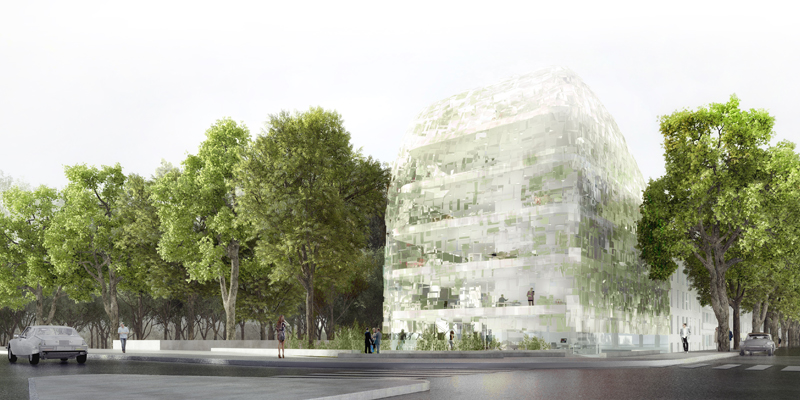 Situated in the west of the commune of Boulogne – Billancourt, the project is set in the complex and heterogeneous landscape of the first Parisian ring road.
At the crossroads of major travel routes, motorway, roads and metro line, the project enjoys an ideal location for a tertiary programme.
Beyond these assets, it is the close and less close landscape context that most caught our attention. Indeed, large parks in the Paris region surround the project within a radius of 2 km and the plot is very close to the Seine, which takes us back to even more distant landscapes.
The project is also located right next to the Albert Kahn Gardens. Enjoying an extraordinary collection of plants, these gardens set a significant biodiversity on site, just like the large parks around.
From then on, the project aims to play with this landscape context by working on a link between the city, the urban fabric and the park.
Like a swarm of migratory birds or the petals of a Sakura, the building is intended to be as volatile as possible in its context. It is a poetic envelope that contains the spatial organization chart best suited to today’s modes of tertiary spaces.

It is a gable architecture that we offer you, an architecture structured by the desire to extend, to extrude an existing urban fabric.
This gable architecture induces a singular volumetry with a specific treatment of the end of the extruded volume.
So the building is born from the gable of the existing building, the ridge is extended until it merges into a more global form.
It is a question of escaping the tyranny of the cube, the archetype of the tertiary building, to propose a more ambiguous architecture borrowed from the poetry and sensitivity of the natural forms that make up the context in which the building is established.
This is also the result of the desire to inscribe the building in a landscape of a city gate, on the border between a natural component: the Seine, a vegetal artifice: the Albert Kahn Garden and an urban fabric: Boulogne-Billancourt.
The volume of the project is the result of an extrusion, a taut volume stretched between the avenue Lattre de Tassigny and the rue du Port. The angles of the maximum volume-gabarit are softened here in order to melt the mass into a soft form.
The building sets up the slope that goes down from Avenue du IV Septembre to Rue du Port. The garden level is therefore semi-buried.

The organization of the building is intended to be as simple as possible. The pedestrian access is located on the Avenue du 4 Septembre, it is via a footbridge that overhangs a slight slope planted with aquatic plants.
The reception-hall is located on the ground floor in a large space entirely glazed on the outside. The entire ground floor is designed to be as transparent as possible to allow visual penetrations between the Avenue de Tassigny and the Albert Kahn Gardens. In this way, we try to preserve the present emptiness, the view of the leafy trees in Gardens A. Kahn.
Access to the upper and lower floors is via the central core, which includes two elevators and an enclosed staircase. The waiting area in front of the elevators stretches along the glass façade. Vertical mobility is staged, and waiting is done in natural light with a view of the Avenue Tassigny. The office floors are organised around the central core, which groups together the vertical circulation and the sanitary facilities. The core is as compact as possible in order to favour working spaces. They benefit from 360° illumination throughout the day. The glass facade offers maximum light filtered through a double skin of transparent panels in autumn tones, opening the Albert Kahn Gardens on the corner of the avenue.

The envelope is born from the meeting of two wills. One of affirming environmental concerns through an aesthetic choice. The other is to transform a sensitive vision of a context into a concrete materiality. The idea is also to soften the perception of an already polished volume.
A tablecloth made of protective petals that bring a multitude of reflections such as those perceived during a walk in the nearby Albert Kahn garden. The petals, simple sheets of glass, are tinted with autumnal colours that play, in harmony or contrast, with the seasons.
Beyond the sensitive aspect, the glass envelope protects the building from seasonal climate variations. Protective in the summer, the envelope does not prevent solar gain in the winter. It contributes to the thermal regulation of the interior of the building.
Finally, this choice brings a real benefit to the quality of the interior space. The perception of the outside will do via a poetic filter, on the city, on the garden, we see through the petals. Workspaces gain in visual quality, it is a frame, a constant painting on the surrounding landscape.