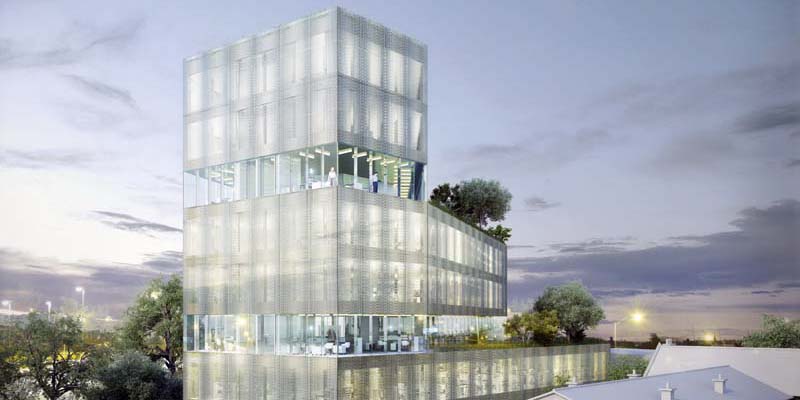 The project is above all a proposal to articulate 2 territories, 2 urban landscapes dissociated by the ring road. This context of urban fringe frees a vast area where emptiness is predominant, where the eye is far away. This work on the perception and reading of the landscape gives the gable façades a major pivotal role. Whether from the ring road or from the rue de Gentilly, the gables are present, predominant in the reading of the building. The curves of the ring road and the notion of displacement generate a reading in perspective with always at least 2 façades perceived: the building will be seen from afar on its short sides, on its corners. This singular landscape offers little frontal perception in geometrical terms. We therefore wanted to work on the expression of a complex volume to avoid any simple and literal wall effect as can be seen at the entrance to the Porte d’Orléans, but on the contrary to propose a volume and a façade treatment that turns around and unifies the building over its entire periphery. There is therefore a unity of place generated for a project which itself must generate visual continuity, articulate landscapes, by proposing a calm image, stretched between two distended territories.

Insertion in the site

Our architecture is a continuation of Henri Gaudin’s work. We extend the size and formal complexity of the Ipsos headquarters, which we write in a contemporary register. The building opens out in a fan shape and gradually becomes more refined as it gains height. Three wide shots with lots of trees are thus freed up. The first one at ground level is a continuation of the reception area. A vast hall with a ceiling height of approximately 5.50 metres extends southwards over the alleyway. Then 2 successive terraces, one on the 4th level, the other on the 7th level open to the south on Gentilly in continuity of the work spaces. The periphery of the outside spaces is delimited by hanging gardens. Each movement of the volumetry features a horizontal caesura of one floor, glazed over 1.95 m high.

The building is composed of three superimposed volumes, each with its own characteristics. Resulting from work on the volumetric archetypes of tertiary buildings, the form of the project asserts a simple, clear, geometrical geometry, facing the large expanses that shape the landscape of the Parisian ring road. In a search for rationality, we propose an organization around a single central circulation. This system makes it possible to improve the efficiency of the standard plan, by increasing the useful office space while maintaining a limited number of technical cores, thus reducing the need for internal relocation. This rationality is reflected in the writing on the façades, which strictly expresses a 1.35 m office grid. The expression of the weave is sublimated by working on a progressive external solar protection that blurs the reading tracks by creating a moiré effect, giving a kinetic aspect to the whole. This pattern unfolds continuously to wrap the building like a woven wallpaper.

The tops all allow for great modularity; they have been designed in line with the standards of office typologies. Each level is a variation on archetypes of 18 m for the first 2 volumes and 12 m for the last one. This compactness and rationality allows us to have an extremely compact core while presenting a Chambord type staircase.

The pedestal is the building’s interface with the public space. It houses the performance areas such as the lobby and reception area, a meeting centre, the cafeteria, as well as service areas such as the bicycle room, the delivery area and the waste management room. Under the west side is the ramp to the parking lot. The parking lot exit leads directly to the street, integrated into the base’s right-of-way. Concealed by the gradations of screen-printed glass, its visual impact is minimal.